Two Danish delegations in 2-day programs with the JAI 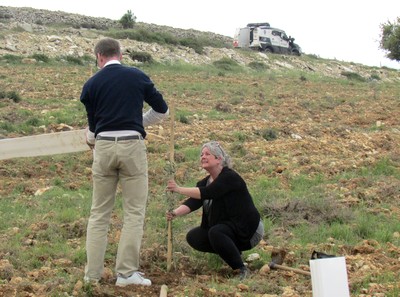 See more photos of the visit

On Thursday the 31st of March, a delegation of 19 people from the YMCA-YWCA Denmark had a day program organized by the JAI. Their day started with planting 100 olive trees at a threatened field in the village of Al-Khader, south of Bethlehem. When started, Israeli soldier in 5 cars and jeeps showed up, tried to stop the activity, but people continued planting. They asked for the land’ ownership documents, which the farmer presented to them. They took and check IDs of JAI staff accompaniers, as well as the farmer's. Soldiers asked questions about the activity and the internationals doing planting and so on. After a while, they had to leave, where internationals formed protective presence for the farmers, and the soldiers could not find any legal justification to stop the planting or kick the farmers out of their field.

After lunch at the field, prepared by the farmer' family, they delegation where accompanied to Hebron by the JAI. Inside the old city of Hebron, the JAI staff explained about settlements and closures inside the city in guided tours throughout the whole old city, market, as well as the Ibrahimi mosque and Shuhada street.

Later on the 2nd of April, another delegation of 16 people, also through the YMCA-YWCA Denmark, had a day program organized by the JAI. The program started with introduction to the JAI advocacy work and the Olive Tree Campaign, followed briefing on the EJ YMCA Rehabilitation Program Trauma and Psychosocial work, which included meeting with some program clients. Later in the afternoon, the JAI accompanied the delegation in a guided tour with witness the Israeli apartheid wall, settlements, land confiscation and bypass roads on the Bethlehem area, followed by meeting refugees and guided tour inside Aida Refugee camp. Later in the evening, the delegation had a briefing at the JAI office by Addameer organization for Prisoners’ Right, on the Palestinian prisoners and administrative detention in the Israeli jails.