See more photos of the program 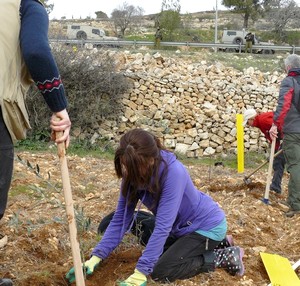 Fifty internationals from the Netherlands, Ireland, UK, USA, Australia, Switzerland, France, Spain, Sweden, Norway and Germany, participated in the 2012 Olive Planting Program, from the 4th until the 13th of February. The program was organized by the ATG and JAI. People came to plant olive trees in solidarity with the Palestinian farmers and people, to learn about Palestine under Occupation and to strengthen the JAI mission to "Keep Hope Alive" for a better future of peace with justice to the oppressed in this ongoing conflict.

Trees were planted in fields owned by Palestinians who cannot easily get to their land due to continues Israeli military and Israeli settlers' attacks. Also on Palestinian's fields on which the Israeli government built by-pass roads, settlements and other infrastructure for its military occupation and settlers.

Participants stayed with local families or at a local hotel, based on their choice. Upon arrival, they gathered at the YMCA in Beit Sahour, introduced to the JAI and ATG teams and volunteers, and each other. Materials and schedules distributed, with explanation, remarks and notifications.

Participants, with JAI staff, were divided into two sub-groups, with an arranged tour guides for the Bethlehem old city, Church of Nativity, Aida Refugee camp, near the wall and settlements. At the camp they met and chatted with some refugees, and toured inside the camp, witnessing life conditions and listening to stories and Israeli ongoing measures against refugees and camp. Kathy from the UK: "are they "Palestinians" just going to watch that they "Israelis" will continue to build the wall?"
Later in the evening, Nidal AbuZuluf, the JAI manager and a co-author of the Palestinian Kairos Document, briefed the participants about the document. In this document the Palestinian Christians declare that the military occupation of their land is a sin against God and humanity, and that any theology that legitimizes the occupation is far from Christian teachings because true Christian theology is a theology of love and solidarity with the oppressed, a call to justice and equality among peoples. 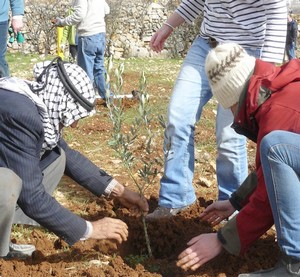 Early in the morning, all participants, with JAI staff and volunteers, headed to Al-Khader village, west of Bethlehem, to plant trees with the farmers where an Israeli settlers' bypass road is built on part of their fields, beside being under threat of annexation for nearby Navi Daniel settlement expansion.
One of the farmers Ahmad Nabhan Mousa, has 7 donums (1 donum = 1,000 m2), was helped by participants in planting about 200 olive saplings in. Ahmad has documents, approved by the Israeli authorities, certifying his ownership of the land. Still, his land is under threat. This was clear in Israeli soldiers' presence at the field while planting, while participants went own with their work ignoring them.

The other farmer Abed Salah, has 25 donums, 20 of where planted with 250 olive saplings by the participants with his and families help. Abed expressed his feelings of happiness due to the support and solidarity he received from participants

Later on the day, the participants were again divided into two sub-groups. One had a presentation and discussion at BADIL Resource Center for Palestinian Residency and Refugee Rights about The ongoing displacement of Palestinians, refugees and Zionist movement’s ongoing plan and dream. The other group had a geopolitical presentation at the Applied Research Institute - Jerusalem (ARIJ).
At the evening, the JAI advocacy officer briefed them about Boycott-Divestment-Sanctions (BDS) Campaign, The campaign is based on a call from the Palestinians civil society for BDS on Israel until it ends its illegal occupation of the West Bank and Gaza, end of discrimination against Palestinian citizens of Israel and end of Israel’s denial of Palestinian refugees rights. The JAI co-launched the BDS campaign and is continuously promoting it. After the lecture, participants got to ask more questions and had more information on the campaign. 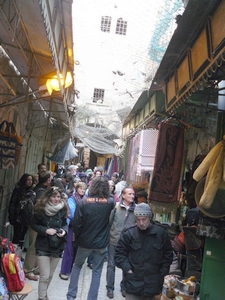 Again, in two sub-groups, one had the whole day in Hebron and the other in East Jerusalem. The Hebron group met first a representative of The Hebron Rehabilitation Committee, where they had a presentation on the life conditions in the old city with settlements inside and on top of Palestinian shops and houses, closures within the old city, daily attacks by settlers and soldiers, closed streets…etc. They were guided then into a tour inside the old city, witnessing those closures, and passed through Israeli checkpoints inside the city. They walked through the Shuhada (martyrs) street. Also, they were guided with presentation inside the Ibrahimi Mosque and had lunch at a family under frequent threat and prevention from visitors by the Israeli soldiers. The sub-group had the chance to visit koufiyeh and glass factories and witness the production process.

The Jerusalem sub-group was tour-guised into the old city, Holy Sepulchre Church, Dome of the Rock, Al-Aqsa Mosque. Later on they had lunch at the East Jerusalem YMCA followed by a briefing on the YMCA work in Palestine. Then, the participants joined a guided tour with the Israeli Committee Against House Demolition (ICAHD) to witness Israeli wall and Jewish settlement surrounding East Jerusalem, demolished Palestinians homes, displaced Palestinians and other aspects of Palestinians reality in Jerusalem.

Participants moved in the bus to the town of Beit Ummar, north of Hebron, to a field where the Jewish settlement of Karmi Tzur was built on parts of the town, where some fields' owners' has received annexation orders, and warning preventing them accessing their field, or their olive and vein trees were uprooted or poisoned several times by the Israeli soldiers. The settlement has three levels of fences surrounding it to grab more and more land for future expansion, while further levels are expected. One of the field owners is handicapped; hence, the village popular committee against the wall received the group. The 7.5 donum field used to be planted with vein trees, which were uprooted by the Israeli military 2 months ago. More than 400 trees were planted in 4 different fields on which the Israeli settlement’s fence is installed. 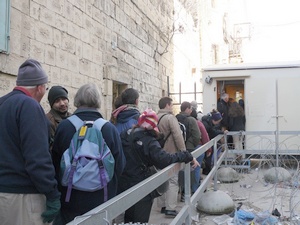 Afternoon, the participants were split into sub-groups, one to Badil Center, and the other had a geopolitical presentation, discussion and briefing about popular resistance in Palestine, with personal experiences and stories by Dr. Mazin Qumsieh, professor at Bethlehem and Al-Quds Universities, and popular resistance activist.

Later in the evening, participants had a presentation and discussion with Sam Bahour, a Palestinian economist and activist. He talked about the Palestinian economy under occupation, international community’ responsibility and his personal reflections on historical and current conditions.

Similar to the previous Jerusalem and Hebron day on Tuesday, the sub-groups switched and had almost a similar experience.

Despite the cold and rain that day, participants headed to Beit Eskaria, a little community located west of Bethlehem. The community with the planted field is surrounded by the Jewish settlements of Allon Shevot, Efrata, Ela'azar, and Rush Tsurim. 400 olive saplings were planted before having lunch prepare by the owner family. The fields were the trees were planted have been targeted by the Zionist Organization called Women in Green, headed by a racist lady from Belgium and aims to remove the Palestinian owners from their land by the assistance of the Israeli Government, representatives of the Israeli Parliament, the military, the Jewish National Fund and various Zionist organizations from around the world.

Cindy from the US commented: "It was a really hard day, but I am so glad for that. I like it because I felt tough!". Daphna from Netherlands clapped her hands and said: "It was so much fun, and it feels good to do some physical work!"

After lunch, the participants had a session with the JAI team, at the YMCA in Beit Sahour, discussing future suggested actions, lobbying in their respective countries, joining solidarity groups and coalitions, with follow up and reporting mechanism with the JAI.

Upon arrival to Birziet University the day started with presentation and discussion with the Right to Education campaign, followed by guided tour within Birzeit University by some active students.

That day coincide with a students march in solidarity with the Palestinian prisoner Khader Adnan, once a student at the same university, who was in his 53rd day of hunger strike, in protest of being tortured, humiliated and placed under the unjustified Administrative detention. 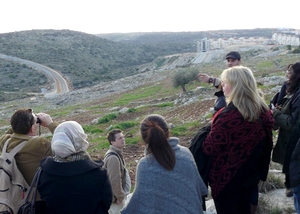 Followed was a meeting with Sahar Francis, director of Addameer - Prisoner Support and Human Rights Association, who briefed them and answered questions about Palestinian political prisoners in Israeli jails, how they get tortures, and the administrative detention policy.

After lunch, a visit and guided tour with arranged in the village of Bili'n and with a member of the popular committee, who explained about the popular nonviolent resistance and how it succeeded to remove one level of the fence, and will continue to resist to remove the second level, which annexes part of the village land. "It was really good to see the results of the protest" Ron from UK said. Participants had the chance to visit the tomb of late Palestinian president and leader Arafat, then walked through Ramallah streets before heading back to Beit Sahour.

This day planting took place at the village of Jaba'a, west of Bethlehem, at fields under threat of confiscation, and were hundreds of old olive trees were uprooted by the Israeli soldiers for the construction of the wall, terminal and a settlers' bypass roads. With the last planting day, the participants have managed to plant at least 1550 olive trees in four different locations and got to help at least 11 families in their struggle to maintain their ownership of their land.

Later in the evening, the participant had a farewell party with cultural music, it was a joyful event and marked the end of another inspiring olive planting program.