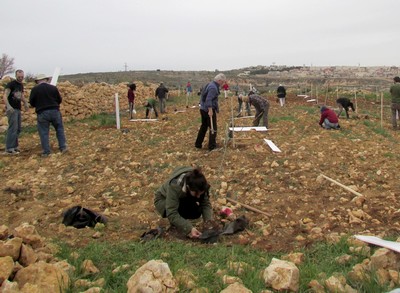 See more photos and a video of the program.

From the 7th of February 2015 until the 16th of February 34 Internationals from countries all over the world joined the Joint Advocacy Initiative (JAI) and Alternative Tourism Group (ATG) in their annual Olive Planting Program. In four morning session a total of 2,050 olive trees was planted on fields that are under continuous threat of Israeli confiscation or had illegal Israeli settlements and outposts close to them. The program also consisted of lectures, visits to sights and cities in the West Bank as well as Jerusalem, advocacy sessions and cultural events. Sabine from Switzerland put her motivation to come to Palestine in these words: "For me it's the people. To see how they struggle every day and still continue. I wanted to support them in this."

On day one of the program the participants got a tour of Beit Sahour, where they were staying either at a hotel or in families, and of Bethlehem, where they visited the Nativity Church as well as Aida and Dheisheh Refugee Camp. In the evening, the group was briefed on the Boycott-Divestment-and Sanctions Campaign (BDS) that calls on Palestinians and Internationals to boycott companies that profit from the Israeli occupation. 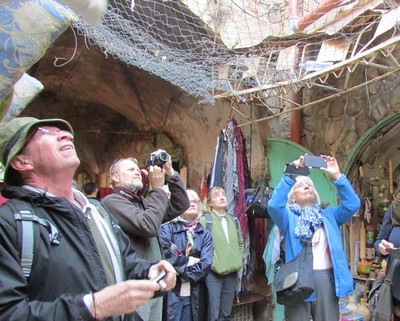 Day two was spent planting. The group was joined by a class of Norwegian students so that about 60 people planted 600 olive trees in Tequa' village on the land of Hussein El Nouh. The field is surrounded by four settlements, the most prominent being Nekodim settlement. The farmer and his family later expressed their sincere gratitude towards the participants. In the afternoon the group went to Badil Center for the Rights of Refugees and listened to a lecture about the situation of refugees in Palestine as well as their ongoing struggle for the right to return. The day finished off with an evening lecture on popular resistance in Palestine.

On Tuesday the participants of the Olive Planting Program went to Jerusalem and toured the old city with a special focus on the political situation in Jerusalem. They were shown illegal Israeli settlements in the old city (East Jerusalem), as well as the segregation wall and house demolitions. The participants also enjoyed some free time on the spacious market in the Arab quarter.

The next day was another planting day. This time 450 olive trees were planted in Nahhallin village on the field of Daoud Nasar - Tent of Nations. His fields have been the target of attacks from Israeli settlers and soldiers several times in the past. In joining the farmer in his work the Olive Planting Program showed solidarity according to its motto "Keep Hope Alive". In the afternoon the group had a geopolitical presentation by the Applied Research Institute - Jerusalem (ARIJ). Another presentation by the "Defence for Children International (DCI) - Palestine Section" followed in the evening. Everyone was shocked to hear that Israel frequently arrests Palestinian children (about 500- 700 per year) from ages 12-18 who are often subject to emotional and physical abuse. 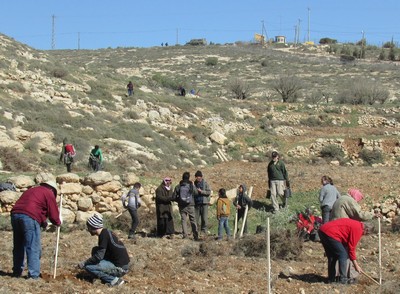 Day five was spent in Ramallah where the group first visited BirZeit University and met with activists from the "Right to Education" Campaign as well as the educational BDS. After that the group went to Addameer Association for prisoners support and human rights to learn about the situation of Palestinian prisoners under Israeli martial law and in Israeli prisons. In the afternoon the program's participants then went to Bil'in, a village close to Ramallah that has become a symbol of popular resistance in Palestine. Every Friday the village protests against the Israeli occupation and the building of the separation wall with peaceful and creative means. These protests are met with brutality by the Israeli armed forces, even killing peaceful protestors. Everyone in the group was very touched by the stories that they were being told, which left them in a state of sadness, anger and frustration.

On Friday the Olive Planting group planted 550 olive trees in Sa'eer village on the land of Ahmad Abu Shanab. The field was situated in a beautiful valley, where next to it an Israeli outpost was laid. During the planting the group was being watched by Israeli soldiers the whole time. 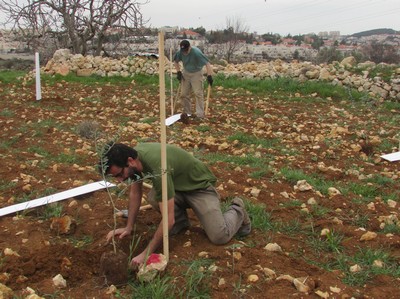 On Saturday the group went to Hebron. There they visited the divided Ibrahimi mosque and experienced the checkpoints in the old city that the inhabitants of Hebron have to go through every day. Everyone was also shocked at the sight of the market street in the old city where Palestinians had to put up a net because fanatic settlers that live in the upper floors of Palestinian houses continue to throw garbage on them. The group also walked on Shuhada Street which is closed to Palestinians. On their walk they encountered numerous Israeli soldiers. In total 2000 Israeli soldiers "protect" 500 illegal settlers in Hebron.

The last day started with planting 450 olive trees in Al-Khader village on the land of Nicola Sarras. His field is situated close to Gush Etzyon Settlement block as well as a newly established outpost.

Over the week the group had developed a routine in olive tree planting and were able to finish quickly just in time before the rain started. The program ended in the evening with folklore Dabka dancing and a concert of Palestinian music. Good Byes were said to new and old friends. Many participants said that they would like to be back for either the Picking or the Planting Program.

Kathy and Edward from Canada reflected on their stay in Palestine at the end of the program: "It has been a great and intense time. It was so much better than we could ever have imagined before we came here. We have learned so much. Many times we were sad and angry at the same time when we heard about and saw the many injustices that Palestinians have to go through every day. Yet we feel that there is also hope. We find it in the persistence of the Palestinian people who fight the occupation with peaceful means. We will certainly talk about our experiences when we are back in Canada and continue to advocate for the Palestinian cause."