"Justice and security are two sides of the same coin. Israel's security can never be an excuse for denying justice to the Palestinian people."

In the spirit of the living God who sanctifies all life and in keeping with our faith and its teachings we appeal to all people across the world to work with their fellow citizens and governments to end Israel's Operation Protective Edge and the brutal military siege that has been going on for the past seven years which includes a naval and economic blockade. Gaza has no port or airport thus no way to import or export its products.

This not a war. This is only vengeance and collective punishment. A responsible authority works to stop useless vengeance and violence. Instead, it fosters general atmosphere of incitement. The irresponsible Israeli Authority, just kills Palestinians and demolishes their houses, in order to please their people. We acknowledge the voice and action of the few Israelis who expressed themselves against this policy of their government.

This is not an escalation or a war. Gaza has no military or ability to protect itself other than to fire some homemade rockets. The 1.7 million people, mostly children (2/3 of the population) are also mostly refugees (1.1 million) from areas of 1948 and 1967. Furthermore under the 4th Geneva Convention Palestinians, as a militarily occupied people, have the right to defend themselves.

Our justice loving God demands us to speak out on behalf of the security for all people. In the name of the Advocate Spirit, we ask you to speak out now to call a halt to this long term offensive operation which aims to wipe out a lonely, besieged and unarmed people. Whether you think the new unity government is viable or not, or if Hamas is a terrorist organization or not, or whether you think they might have been behind the death of the three Israeli teens murdered near Hebron, (which is not proven so far) it is against international law to collectively punish or target an already besieged 1.7 millon population. It is inhumane. It is a war crime. 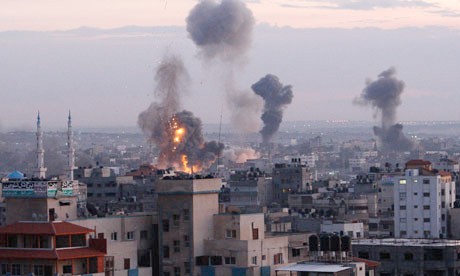 As of July 10th, the date of this Appeal Israeli military struck 430 targets across the Gaza Strip. 77 people have been reported dead and more than 500 wounded.. The majority of the dead are civilians. 18 are children including a baby one month old.

We pray for the memory of those killed. Each of them has a name and a family who is suffering great loss. We also pray for all those wounded or injured in body, mind, or spirit. We pray for solace and comfort also for the families whose homes, businesses, agricultural fields, or fishing boats that have also been destroyed. We pray for the people of Gaza and ask that God be with them.

Support Palestinian’s right to freedom and statehood by joining with Christians throughout the world in their call for a just peace in this land that all call holy. We have been down this road one too many times and know what will happen if we fail to act. Please join us through letters and petitions to your government officials to raise awareness about this offensive military operation and Gaza's ongoing siege. Ask them to pressure Israel to stop its brutal assault or face sanctions from the international community.

Support Palestinian's right to normal life, say with a loud voice: stop killing and demolishing houses. Join with Christians throughout the world in their call for a just peace in this land that all call holy.

Quote from article by Jeremy Corbynn,, "Who Mourns for Palestine.."