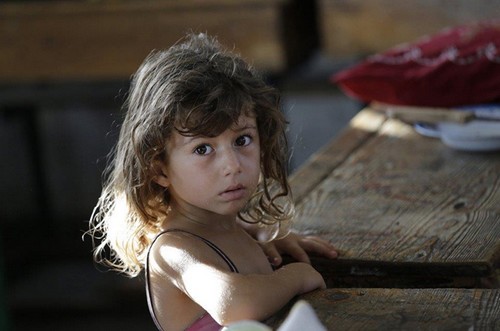 This is five-year-old Hajar Muharram. Look into her eyes. She is from Beit Lahya, one of the towns where the residents were forced to evacuate their homes due to bombing. Her family got one of those courtesy missile knocks on the roof telling them they had 58 seconds to leave. Hajar and her family of seven fled their home and have since joined hundreds of other Palestinians taking refuge in a United Nations school which is being used as a shelter. But shelters are not guaranteed safe places; over 8 UNWRA schools/shelters have been bombed. Look into her eyes for this may be the last time if her school is targeted.

Children are bearing the brunt of this newest offensive military bombardment. Since July 8, over 430 children have been deliberately killed in Gaza with over 2,878 more injured. In addition there are over 373,000 more who require psycho-social support. There is no post-traumatic stress syndrome because the trauma is ongoing. If Hajar survives she will be one more child in need of this support. Look into her eyes and see what has happened to her home or neighborhood.

Over 485,000 people have been forcibly displaced which is almost one third of the Gaza population as a result of Israel's latest military offensive against Gaza. Many of them were refugees from 1948 or have grown up in one of Gaza's refugee camps.Their homes in the camps have been targets. Hajar in Arabic means "emigrated" but there is nothing voluntary about her displacement. The legal term for this is forced transfer. The term on the streets is ethnic cleansing.

We believe that the international community has the legal and moral responsibility to protect the Palestinian population living under Israeli occupation and that it must hold Israel accountable regarding its severe violations of international humanitarian law. Lack of accountability will continue to fuel Israeli atrocities and crimes. We must move past moral outrage to direct action to demand Israel to end collective punishment of civilians. This is the year of solidarity with Palestine. Stand with us and stand up to Israel's impunity.

In addition to ending this military occupation against the State of Palestine here are things you can do:

Let Us Join Forces to End this Occupation